We are quite emotional here at Feltham’s Farm because we spent Saturday glued to a screen watching our peers and (far better) cheesemakers and mongers than us decide that Renegade Monk is the Best British Cheese for 2020!  It feels very surreal, and yes, there were tears, disbelief (and some embarrassment from the children, who couldn’t quite believe that we were live on Zoom to the rest of the cheese world).   Congratulations to everyone else who won.  Here is what Speciality Food Magazine wrote about it : – 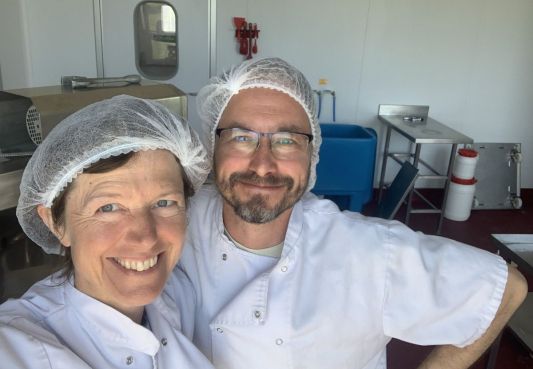 Feltham’s Farm was awarded the Best British Cheese accolade at the inaugural Virtual Cheese Awards. The virtual event, which took place on 18th July, showed a live audience of over 3,000 a full day of judging from a panel of experts, with over 300 cheeses whittled down to 30 across seven categories. The Renegade Monk soft blue cow’s milk cheese from Feltham’s Farm wowed the judges and secured the title of Best British Cheese. Part of the prize is £4,000 worth of coverage in Speciality Food and its sister consumer title, Great British Food.

Marcus Fergusson, founder of Feltham’s Farm said, “Winning this award is huge for a tiny artisan producer like us. We sold our first cheese in March 2017 and last year sold just 6,000 cheeses. We are profoundly grateful for the exposure that the Virtual Cheese Awards has brought us and many other artisan cheese producers – we all need all the help we can get right now and we hope that the awards will encourage the public to keep buying artisan cheese from small outlets and not return to the supermarket habits of old!”

Joint second was awarded to Cornish Gouda for its Fenugreek Gouda and Long Clawson Dairy for its Rutland Red, with Beacon Blue from Butlers Farmhouse cheese coming in third.

Sarah de Wit, co-founder of the Virtual Cheese Awards and Cheese & Dairy consultant said, “It was an amazing day and we’re so grateful for everyone who supported our crazy idea to set up a virtual cheese awards back in March. The quality of British cheeses entered into the awards was amazing and the judges had a tough time narrowing it down to just one cheese. Renegade Monk is a very worthy winner and a fantastic example of a small artisan cheesemaker that is reinventing what a British cheese should be. We really are leading the world with our exceptional cheesemakers and we’re super proud to shine a light on them. All we ask is that consumers go out and buy these cheeses and support our British cheese industry.”

Holly Shackleton, editor of Speciality Food magazine said, “I am delighted to be part of this brilliant initiative to support and elevate British cheese during a challenging time for the industry. This exciting new virtual format enabled a great day of judging, celebration and discovery, and really shone the spotlight on our top-performing cheesemakers who thoroughly deserve higher recognition. We are committed at Speciality Food to supporting the British cheese industry – I now look forward to delivering some valuable promotion to the winner across our print and digital platforms. Congratulations to the winners, the organisers, and indeed everyone who participated to make this day a success.”

All profits from the event will be given to the Specialist Cheesemakers Association and RABI (Royal Agricultural Benevolent Institution) so they can continue to support British farmers and dairy producers.

About the Author: Feltham's Farm Cheeses